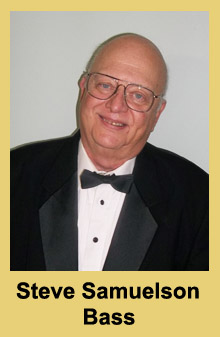 Steve Samuelson took his first music lesson at age five. When he was only twelve years old, he directed the school band for a school assembly, because the band director could not attend. In his teens, he studied Jazz Theory and Arranging. In College, he performed in several musical groups including his own combo and the OSU Phi Mu Alpha Jazz Workshop band. He has worked with professional groups in the Columbus Ohio area, and in South West Missouri. For several years he played bass with The Tunetimers, a Central Ohio comedy band. For fifteen years, he directed the DeVry Stage Band. He also performed with a strolling Dixieland band, and was the bassist for the Sonia Modes Trio. In Branson, he had his own 14 piece dance band, and he performed with the Dave Rice Old Town Band. Currently, in addition to the Sounds Pretty Good Combo, Steve is the tuba player for the Brandon Street Stompers, a SW Missouri Dixieland Group.